After 5 endless months since recordings started and going through laborious process of editing, mixing & mastering, the long awaited new album of AVULSED “Ritual Zombi” is finished!! This album will have a never-seen-before particularity on such an undeground Death Metal release (even never seen on major labels!!) and consists of a simultaneous release with 9 releases on 8 different labels around the world in 4 different formats: 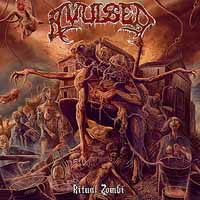 Tracklist:
01. Dawn of Apocalypse (Intro)
02. Dead Flesh Awakened
03. Z-Hunter
04. …Was Not My Blood
05. Horrified by Repulsion
06. Zompiro
07. Elegy for the Rotting (Interlude)
08. Unborn of the Undead
09. Brainsuck
10. Zombie Ritual (DEATH)
11. Cannivegan Corpse
12. Cult of the Living Dead
13. Devoured and Forgotten (Outro)
As the band states: “We’re extremely proud of the final result. We feel we took the best decision using Javi from Moontower Studios for the mixing cos he knew what we wanted in every moment; his experience was essential. But the work made by Dan Swanö at Unisound Studios on the mastering which in fact wasn’t a typical mastering, but kind of a second mix, was what definitely gave this new album an incredibly heavy, thick and organic sound. We never sounds so fucking crushing!! This is easily the best AVULSED album, not only productionwise, but also the own songs and the great cover artwork, of course!!”.
A new song will be revealed in the coming days via the band’s official Facebook, so stay tuned!! In the meantime, the band has organized a special pre-listening party next friday 19th of July at the Tyrant metal pub in Madrid after 20:30h. for anyone, both medias, fans and friends that wants to give it a complete listening to the album. Of course, all band members will be there to share some beers, so if any of you is in Madrid in that moment and want to have an exclusive listening to the whole “Ritual Zombi” album, you’re more than welcome!!
The band is preparing very special packs both on CD & 12″LP (gatefold) formats contaning lots of stuff like exclusive shirt, signed photocard, patch, sticker, badge, guitar pick, exclusive card, poster, etc… limted to 100 units that will be available for preorder in early August exclusively through the Xtreem Music online shop.