Greetings Stefano, you finally found a label for Wolfuneral. Congratulations about that and also on your first official album.
Greetings and thank you very much, I’m very happy about that too. 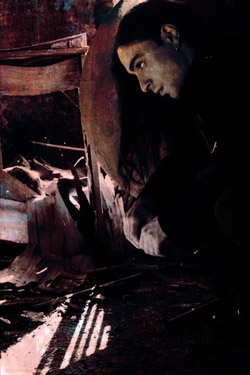 Are you satisfied with the collaboration?
Yes, I’m pretty satisfied about that. They immediately were interested and helpful about my album. I’ve sent them the artworks and all the details and I’ve to say that they did an awesome work on that. When they sent to me the first copies of my album, I’ve been very satisfied.

What can you tell me about your album? It sounds totally different then anything you have released so far under the name Wolfuneral.
Well, as I always say, I come from black metal music. I’ve always preferred to play that, so after a couple of albums in ambient music, I tried to record something that sound more black metal. I was worried just about the fact that I had to record it entirely by myself, but despite all the problems, I was sure that it had to sound right this way.

What made you change the style of Wolfuneral from Darkwave to Black Metal?
It was just the wish to record a black metal album, I had old ideas in my mind and I wanted to work on them. The main idea was to put together the old style with black metal style, so it was that to bring me on this new sound.

Are you happy with this new approach to music?
Yes, I’m. I mean, surely the style of the songs is very near to what I had in my mind, there are just a couple of things maybe that don’t satisfy me completely, but I think that I’ve put both the styles together in a good way tough. 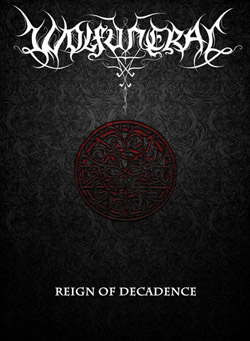 Can you tell me something about the songs on the album?
Well, I tried to put together the old works with something more black and heavy. What came out is an album with songs that are influenced by ambient, doom and atmospheric metal. The most important thing to me was the atmosphere in every song. In fact most of them have just a couple of riffs repeated several times during the track. There are a couple of songs that are a bit faster like "World of Lies" or "Agony", but the entire album is pretty slow, melodic and linear. I tried to give them more atmosphere with keyboards, choirs and the vocals. Songs like "Absinthe", "Suicide Calls" and "Chaos" are very good about this in my opinion, I guess that every instrument and the vocal part are mixed together to give exactly a kind of emotion to the listener. But of course I’m satisfied also about the others, "Reign of Decadence" is probably the song that mix black, ambient and doom metal in the best way. The only thing, as I said, is that maybe with a different guitar quality and sound they could sound more deeper.

Your album is now out for some time. Can you tell what "version" of Wolfuneral does your fans like more?
If I look to the listeners around the web, I have to say that the old version has more success, but I guess that it’s also because that kind of music is more simple to listen than black metal, I mean it’s more simple that someone likes "Out Of The Dark" than "Absinthe" of course.

I know that I am getting boring with these questions about your old style (  ), but is there any chance that you will come back once to it?
I don’t know that, everything is possible. I mean that I play what I feel to play, so if my ideas will be in the old direction, I surely will return to play that.

Is there any chance that this label will also release your other releases?
Honestly I didn’t talk with the label about that, I would like to have my old works released of course. I’m taking care about the new album now, so maybe in the next period I’ll try to talk with them about this opportunity. 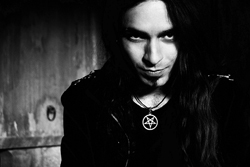 Does this change also mean that there might be a chance that you will play live with Wolfuneral? I think that it is easier to play live with BM then with Darkwave.
Yes, it would be simpler for sure. I’d like that but I need live members at least and it’s not easy honestly. I keep looking around if there’s a chance to do that but I can’t be sure that it will happen soon.

Are you planning now to get a full band or will Wolfuneral stay only on you?
Now it will remain just my personal project, also because I play with another band yet so I like to be free in this project to write just what I have in my mind.

Any last words?
I want to thank you for this opportunity and all the people that follow my music. I hope old fans will appreciate also the new work as the first one. I’m doing my best to come out with new music as soon as possible. Stay Black.