Blast Head Records announced their signing of Ancient Roman death metal band ADE for the spring release of their sophomore album entitled ‘Spartacus’, which features extreme metal drummer George Kollias and will be the band’s follow up to their 2009 debut ‘Prooemivm Sangvine’.
True masters of music, ADE, formed in 2007, with the purpose of blending death metal with the traditional instruments of ancient Rome and Greece.
“When I first listened to ‘Spartacus’ I was instantly intrigued by the amazing song structures, production and most importantly the musicianship of ADE! From start to finish ‘Spartacus’ grips you with musical hooks and their use of traditional Roman instruments allows you hear something new with every listen. The album is very powerful, memorable and in all honesty is a major contender for album of the year! I am beyond proud to have ADE on Blast Head Records to showcase their talents to the world!” comments Paul Shaw, owner of  Blast Head Records.
This first single ‘Duelling The Shadow of Spartacus ft. George Kollias’ is now streaming below. 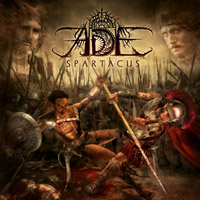 Tracklist:
01. Betrayer FromThrace
02. Sanguine Pluit in Arena
03. The Endless Runaway
04. Crixius Flags Of Dishonor
05. Duelling The Shadow Of Spartacus
06. Mars Unpredictable Favour
07. Decimate The Coward
08. Six Thousands Crosses
09.  Divinitus Victor
10. For Everything To Be The Same…
“’Spartacus’ is a masterpiece…that simple! I feel blessed and honored recording the drums for this album. ADE can play great and write some of the best songs in the genre; the combination of writing, feel and musicianship is in this album outstanding; they worked very hard on each song and that shows very well. ‘Spartacus’ has some really unique elements and ideas that ADE combines with the best –and fresh- way possible…this is why I can’t wait to see people’s reaction with this AMAZING album!!!” comments  drummer George Kollias.
Video of George Kollias commenting about ADE: