Valefor,a depressive black metal band which has worked on a new album almost a year,finally is completed all the preparations and album is out now. This is ongoing band as the only person still Sargathus. The album which has 10 songs was recorded by Studio Dream and agreed with Japanese company “Sabbathid Record”. 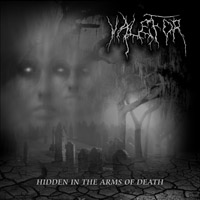 The album that called “Hidden in the Arms Of Death” tracklist :
01. In the Emptiness
02. Journey to Obscurities
03. Mental Collapse
04. Timeless End
05. The Torment of the Grave
06. Behind Misty Shadows
07. A Paranoiac Dream
08. Born from Reflections
09. Hidden in the Arms of Death
10. The Existence of a Deception