Spanish death metal band Decapitated Christ has come to terms with the label Metal Inquisition, sublabel of No Colours Records for the release of their third recording, “The Perishing Empire of Lies” 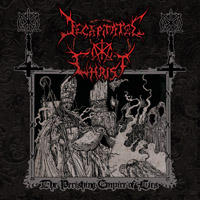 The album was recorded in April 2012 by Javi Bastard at Moontower Studios (Korgüll the Exterminator, Graveyard, TeitanBlood, Ataraxy, Necroven …) and consists of 12 tracks of pure old-school death metal (plus some unreleased tracks from their demo “The Vanishment”).
It also features collaborations of two titans of the scene such as Martin Van Drunen (Asphyx / Hail of Bullets / Grand Supreme Court Blood) and Pete Sandoval (Morbid Angel / Terrorizer), and has been mastered by Dan Swanö.
The Perishing Empire of Lies is scheduled to be released in February 2013, LP limited to 250 hand numbered copies, 50 DigiCd’s special and regular CD.
The artwork is done by illustrator Cesar Valladares (Asphyx, Krisiun, Anatomia…)
A video  preview of the new work can be watched below.
Decapitated Christ’s demo “The Vanishment and Extermination of the Deities” can be heard and downloaded for free at  http://decapitatedchrist.bandcamp.com.