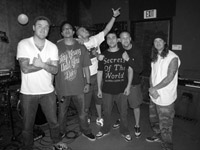 A studio blog/diary documenting the sessions can be found at this location.