Italian horror-inspired extreme metal act STIGMA has unveiled its first single, “Prove You Are a Man!” Coming off of the band’s sophomore effort Concerto for the Undead, the track features a guest appearance by Jon Hunt (ex-DEAD TO FALL).  “Prove You Are a Man!” is available at the band’s MySpace where Concerto for the Undead is available for pre-order. 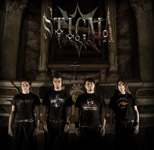 Concerto for the Undead was produced at Fear Studio by ex-BLEEDING THROUGH and current BRING ME THE HORIZON guitarist Jona Weinhofen and was mixed & mastered by Scott Atkins (BEHEMOTH, CRADLE OF FILTH, SYLOSIS).  This sophomore effort is due out April 30th in Europe, May 3rd in the UK and May 4th in North America via Pivotal Rockordings. The album features lyrics centered on the cult-classic comic book series Tales from the Crypt and includes guest vocal appearances by Jamie Hope (ex-THE RED SHORE) and Jon Hunt (ex-DEAD TO FALL).  Artwork for the album features stunning comic illustrations of the band’s now patent horror themed lyrics and was created by Andrea Berton of Corefolio Design (THE BLACK DAHLIA MURDER, WINDS OF PLAGUE).