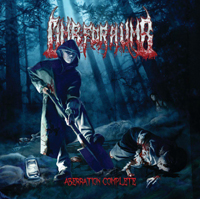 After numerous demos, the debut album of the Hungarian gore/grind pack known as Limb for a Limb is out. Entitled “Abberation Complete”, the disc contains 19 skullcracking, brain-boiling and ultra brutal gore/death/grind putrefactions, complete with a kick-ass cover of Marduk’s „Panzer Division Marduk”. The familiar growls are spewed forth by Sándor Hajnali from Gutted. Intensity, neckbreaking rythms and furious blastbeats for over 30 minutes.