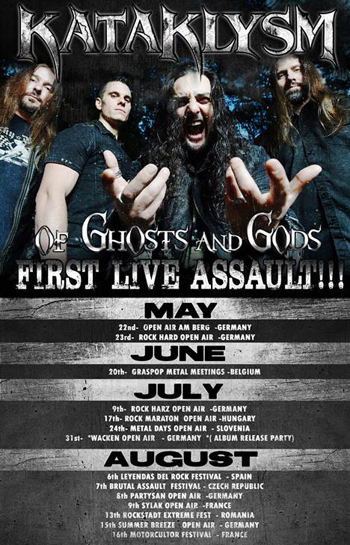 Montreal based death metal powerhouse KATAKLYSM, are done with the recordings of the follow up to their critically acclaimed “Waiting For The End To Come” album. The record, which has been dubbed “Of Ghosts And Gods”, is set to be released July 31st via Nuclear Blast!
Guitarist J- F Dagenais has tracked drums, guitars and bass for the album, while vocals were recorded by producer Mark Lewis (WHITE CHAPEL, DEVILDRIVER, CANNIBAL CORPSE). The entire process will be mixed and mastered in the UK by legendary producer Andy Sneap (MEGADETH, TESTAMENT, EXODUS, AMON AMARTH).
The band states: “The new album is finished being recorded and will travel into the very capable hands of legendary producer Andy Sneap this month for the final mix and production work. We haven’t been this excited to release an album in a very long time , “Of Ghosts & Gods ” is set to stand alongside the bands classic records like Shadows & dust, Serenity in Fire and In the arms of Devastation it has all the elements that make Kataklysm the force that it is with unrelenting power, melodic hooks , extreme passages and the head stomping grooves Kataklysm is well known for, plus it jumps into new territory in the true nature of the band’s adventurous exploits to push the limit, the end result will be our fans head banging with their horns in the air and shouting the hymns – and that’s our satisfaction right there., We will be hitting the road this summer with a string of Open-Airs in support of the album which will drop JULY 31st Worldwide. This is a determined Kataklysm like you’ve never seen before,, be ready m/”