Cernunnos of black metal act Haeresiarchs of Dis announced that previous plans to release “In Obsecration Of The Seven Darks” as an EP have changed. The new EP has been expanded to a full-length release, and is expected to be released through Moribund Cult Records in Spring 2011. 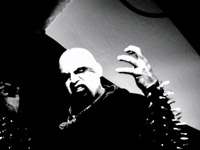 Tracklist:
01. In Obsecration of the Seven Darks
02. Onward Through the Oculus
03. Remembrance of He Who Defied God
04. Aut Vincere Aut Mori
05. Confounded by the Vanquished Coil
06. Passage
07. Ensorcelled by Khaos (Emperor Cover)
08. Grazioso Drone