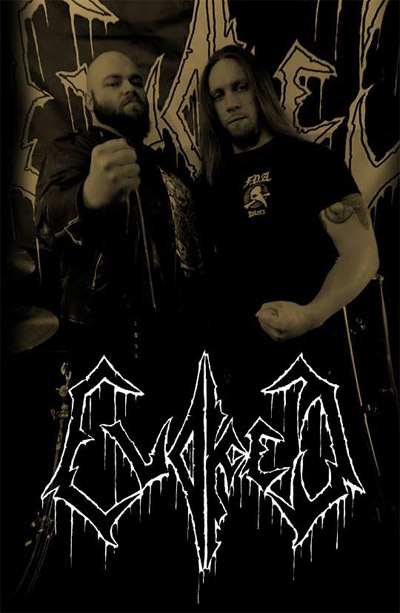 German death metal band  Evoked anounced  a new addition of F.D.A. Records. This year will be released their debut new album. Label describes them as the result of Morgoth from the time of “Cursed” and the classic, Scandinavian and American influences.
The team established in 2013. guitarist nicknamed Bonesaw. Later that same year, he joined by drummer nicknamed Artilleratör and in January 2014 they recorded their first demo “Return Of The Dead” in the studio at Hellforge Marco Brinkmann, who dograł on this material as bass lines. Demo tape of 150 pieces. Released a few months later, the underground, the German Go Fuck Yourself Productions, the same team with some Krematorem as a session bass player started to play their first concerts – also outside Germany – in the Netherlands and Belgium. At the end of 2015 they recorded the Go Fuck Yourself Studio 5 new songs that in August 2016 were released as a 12 “EP” Lifeless allurement “with the cover, which did them Putrid Matt (Putrid Gore Art). The EP is available, among others, in FDA Records store.

FERAL ''From The Mortuary''