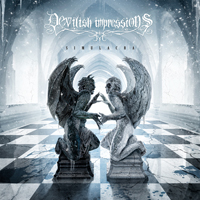 Polish blackened death metal upcomers DEVILISH IMPRESSIONS have revealed the first track off their upcoming album “Simulacra” due to be released July 30th in Europe and on July 31st in North America. The track entitled ‘Icaros’, which also the first track on the album, can be listened by clicking here.
Despite having only two albums under their belt DEVILISH IMPRESSIONS quickly managed to put their name out there. Critically acclaimed records and intense touring along with some of the biggest names onto the metal scene made them one of the most promising acts on the European map of extreme music. After a row of personal problems that eventually caused several line-up changes and temporary stage absence, the band strikes back with the brand new opus called “SIMULACRA” and is now ready to take the scene by storm again.
“SIMULACRA” is the 3rd full-length by DEVILISH IMPRESSIONS, considered as one of Poland’s leading and most innovative modern black / death metal acts. Wrapped in breath-taking artwork created by Xaay (NILE, KAMELOT, NECROPHAGIST etc.) the album also features guest appearances of Orion (BEHEMOTH, VESANIA), Jacek Grecki (LOST SOUL) and Roman Berežnicki (LECTER) as well as session synth / samples / fx appearance by Flumen (ASGAARD) and Lestath (METRANSMISSIONAL).