From the darkest depths of 90’s arrives one of the icon bands of Chilean Thrash Metal. DARKNESS, a foundation of old school with more than a hundred shows within the Chilean metalhead scene. After a long time and with AUSTRALIS RECORDS, the raw band of Thrash with Death Metal influences is back in order to release its official production for the first time, and is nothing less than his remembered debut demo “DEMO I” recorded in 90’s that added to its modern-sounding EP 2012 shapes one of the most awaited albums of recent times. In more than 40 minutes, SUIVAN KONG (Guitar and Vocals), FRANCISCO CAUTIN (Bass), SEBASTIASN ORMEÑO (Guitar) y MARTIN VALENZUELA (Drums session) give new life to death and its scythe that in the 90’s hit the metal scene of a troubled and metal thirsty country! 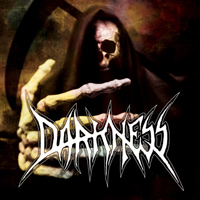