Brutal Death metallers from Murcia (Spain), Dark Confessions have released the cover of their debut album, recorded in the UltraSound Studios 2 from Portugal and produced by Daniel Cardoso (Noctem, Angelus Apatrida, Anneke VanGiersbergen, etc.)
The artwork of the cover has been designed by the well known Marcelo Vasco from Brazil (Satyricon, Slayer, Job for a Cowboy, Noctem, Soulfly, etc.)
The tittle for the debut opus of these extreme metallers is “Insanity” and contains eleven tracks where the band combines their old and new influences, producing as a result the blasting sound of Dark Confessions. 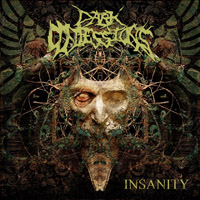