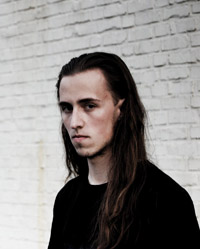 Chton announce a new vocalist Craig (also in Demontera) in their ranks. After their previous vocalist Terje (CHTON vocalist from 2002 to 2011) left the band just after recording CHTON’s upcoming sophomore album “The Devil Builds”, the band had a brief period as a 4-piece with bass-player Ola handling main vocals. Now the band has found a dedicated vocalist in Craig, and Ola is back to handling bass and backing-vocals.
Commented Torstein: “Now we have found a vocalist in Craig that has the guts and dedication to front CHTON, giving 666% as he shreds his throat and spits blasphemies from the stage!”
CHTON is set to host a releaseparty for the upcoming album “The Devil builds” on September 15. at Fru Lundgrens in their hometown Trondheim.