After an EP and a Promo album, the Turkish Progressive Death Metal band BAHT finally finished the recordings of a 8-song full length album titled “In My Veins”. The Finnish musician Joona Räsänen has taken the duty of drums recording in it, as he did in the band’s last promo album.
“In My Veins” is mixed and mastered in Unisound Studios in Sweden by Dan Swanö, who contributed many bands such as OPETH, BLOODBATH,KATATONIA, EDGE OF SANITY… 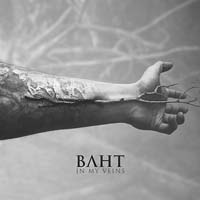