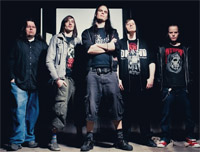 Norwegian Pissed Off Deathcore band INSIDE I has signed a deal with label Wormholedeath/Aural Music for the release their debut album “Beneath The Circus”.
The album that includes 10 songs of pure sonic assault and was recorded and produced by Espen Hogmo and mastered by Christian Donaldson (The Agonist, Cryptopsy).
The artwork for the album was made by Colin Marks @ RainSong Design.
Release date will be announced at the beginning of this year.
You can preview the first track “Nightmare” here: