Vancouver BC’s Lovecraftian death metal trio Auroch are proud to announce their signing to metal label Hellthrasher Productions for the release of their first full-length album ‘From Forgotten Worlds’ set to be released later this October.
“This is merely the beginning. We look forward to this pact with such a dedicated label known for their great releases and support of metal.” comments vocalist / guitarist Seb Montessi. 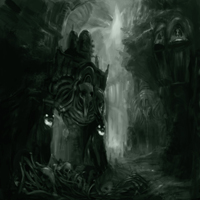 Tracklist:
01. From Forgotten Worlds
02. Fleshless Ascension (Paths of Dawn)
03. Slaves To A Flame Undying
04. Dregs Of Sanity
05. Talisman For Total Temporal Collapse
06. Terra Akeldama
07. Bloodborne Conspiracy
08. Tundra Moon
The band is now streaming two of their latest singles from the release : Slaves To A Flame Undying, From Forgotten Worlds.
Showcasing the band’s metamorphoses from thrash metal band into a full-fledged death metal assault, the debut full-length album is raw, relentless and tapping into a musical current of the wrath of Lovecraft’s Ancient Ones. Any and all who question or condemn modern conventions should sympathize with the ideologies and mythos provided. Fans of barbaric blasting and technical shredding should associate with the musicality.