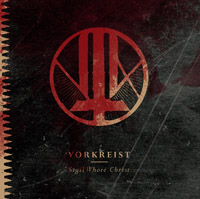 Sigil Whore Christ  was recorded at Drudenhaus Studios (Alcest, Les Discrets) and is described by the band as catchy as hell, brutal as fuck, and still with this overwhelming feeling of sickness.
VORKREIST is:
Saint Vincent: Vocals
A.K.: Guitar
EsX: Guitar
LSK: Bass
Dave Terror: Drums
With over 12 years of experience in the French black/death metal scene, the band has gained a solid stage reputation, having previously performed with BELPHEGOR, DODHEIMSGARD, KAAMOS, OFERMOD, CODE and KAMPFAR, among many others.
Sigil Whore Christ  will be available as: digipack CD, digital download, heavy vinyl and limited to 100 copies heavy vinyl with red splatter (the last one available only via Agonia Records Webshop). The first pressing of every vinyl comes with an exclusive poster.