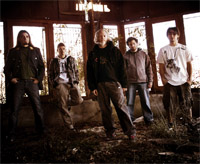 Italian Post Hardcore combo Underwell have signed a worldwide deal with Wormholedeath/Aural Music Group for the release their debut album “Plan Your Rebirth”
The album that includes 10 songs of pure sonic assault and was recorded and produced by Alessandro Paolucci (Raw Power, The Way Of Purity) mixed and mastered by Christian Donaldson (The Agonist, Cryptopsy). The artwork for the album was made by G. Petersoo at Machine Room Design. Release date will be announced at the beginning of 2012.
Here you can listen “A Shadow Of the Night” taken from the album for preview: