The debut album of spanish melodic Death Metallers THE DESCENT is ready and will be released in October 1st through XTREEM MUSIC. With an excellent artwork design by Auryn Digital and a great production by Carlos Creator at RockStudios being later mastered at swedish Fredman Studios by Fredrik Nördstrom, “Dimensional Matters” is a magnific album which will sure please any fan of melodic yet aggressive Death Metal the swedish way a la AT THE GATES, DIMENSION ZERO, early SOILWORK, EUCHARIST… 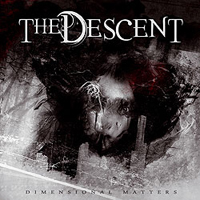 Tracklist:
01. The Web of Lies
02. Sacred War
03. Winter Hell
04. Rejected by the Sun
05. The Day After
06. Drug
07. Wraith (Tied to Reality)
08. No One Cares
09. Confined
10. Guilty Conscience
THE DESCENT recorded an official video-clip with a song from the album entitled “Rejected by the Sun”which perfectly shows their ability to blend melody, catchy riffs and killer grooves with heavier and more aggressive passages combined a varied vocal department, which makes of this album a very dynamic and enjoyable work.