The band commented: Six Years of burning visions for the Spektr to return wrenched from the hermetic silence of Initiated Temples .The Ectoplasm Cypher thus stands as the Stone-Principle emerging out of Philosophal fumes – the transcended transcription of the most sealed occultism on audio format. Spektr commits, Agonia endorses – I’LL BE RIGHT THERE IN THE AFTERLIFE – and we ain’t going nowhere.
Successor of Near Death Experience (from 2006) will be made available as CD, Vinyl and digital download. 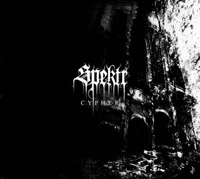