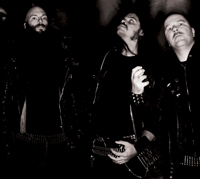 Swedish black metal outfit PEST has inked a record deal with Agonia Records. Band’s fourth full-length album, entitled “The Crowning Horror”,  is tentatively slated for June 2013 release.
The album will be preceded by an EP featuring two new tracks, which will be released this April. It will be available on a 7″ vinyl and titled “Black Oath c/w Morbid Revelations”. More news will follow shortly. The band commented: “After years of silence a new wave of black death will finally strike the world. The plague is upon us. Bring the darkness!”

Over Dead In Over