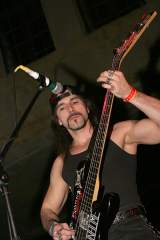 Poland’s Gazeta Wyborcza is reporting that MORTICIAN vocalist/bassist Will Rahmer is likely to spend the next few weeks at a Polish jail while the prosecutors prepare an indictment against him for robbery with a dangerous weapon. The judges from the Polish town of Krosno Odrzanskie (where Rahmer is currently being held) have accepted a proposal from the prosecutors to detain Rahmer for up to three months in accordance with the Polish law.

In addition to the charge of robbery with a dangerous weapon, the prosecutors will likely charge Rahmer for resisting arrest and assault on a police officer.

Rahmer, 36, was arrested by the Polish police after he allegedly assaulted a taxi driver with a knife and stole a taxi cab following the group’s performance in the Polish city of Zielona Gora on Sunday (Nov. 13).

Rahmer reportedly called a cab after MORTICIAN’s concert in Zielona Gora (which the other MORTICIAN members performed without Rahmer) and requested to be taken to the Berlin airport so that he could fly back to the United States. He allegedly paid the driver 200 euros for the ride, but apparently went berserk when he was unable to reach someone on his mobile phone. Rahmer allegedly proceeded to attempt to gain control of the vehicle, in the process causing a small cut to the cabdriver’s neck with his knife. The driver managed to escape and contacted the police. He was subsequently taken to the hospital, where he received two stitches. In the meantime, Will stole the car and drove himself to the Polish/German border crossing in Swiecko, where he allegedly got into a scuffle with the authorities before being detained.

At the time of his arrest, Rahmer was reportedly not carrying any additional cash or a valid passport. He was, however, in possession of at least one knife and a set of knucklers, according to Gazeta Lubuska.

Speaking to the police through a translator, Rahmer apparently offered a very different account of what transpired to the version given by the taxidriver.