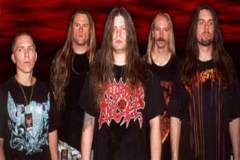 “VILE’s third full-length CD, entitled ‘The New Age of Chaos’, is now out and in stores worldwide!! The European press has been highly complementary and we have been averaging an 8 or 9 out of 10 in the European print mags and web zines! We’re now gearing up for a U.S. promotional campaign thanks to Dave Bremmer and Earsplit PR.

“We’re going to be touring Europe in April/May and are currently looking for our best options for a U.S. tour. As you may know, VILE is also in the process of recruiting some new members to make this new phase of touring possible and we plan on doing some west coast shows with them in January 2006.”

“The New Age of Chaos” was released in the U.S. last month via Unique Leader Records. The CD came out in Europe in late September through Listenable. The group’s recording lineup was as follows: