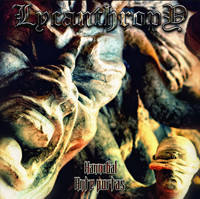 Russian/Ukrainian collaboration Lycanthropy has announced future plans for two releases. First one is a brand new album “Hannibal ante portas”. It was recorded and mixed during June/July 2012. Full-length contains eight tracks – eight unmerciful manifests of pain and suffering. With this progressive black/death metal record band signed with the U.S. based Unmerciful Death Productions. CD release is scheduled on December. As for the second release – it is going to be “Mighty and Despair “MCD. Gunner has made the following statement about this stuff:
“This particular material came out of nowhere. It wasn’t even planned to be recorded. No preparation, it was just Furious idea – “let’s do something interesting”! Voxum was done a little bit latter, while guitars were recorded at once. As a result we do have these sick and experimental songs “. MCD will be released on the German based K.S. Versand.
Check samplers on: Soundcloud | Youtube

STROSZEK ''A Break In The Day''