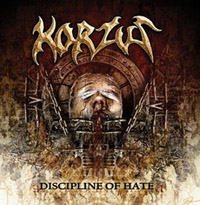 “Truth”, the brand new video from Brazilian thrash metal veterans KORZUS, can be viewed below. The song comes off the band’s new album, “Discipline Of Hate”, which is being released in Brazil on May 24 and the rest of the world on June 11 via AFM Records. The international version of the CD will contain a bonus track, “We Are Just The Same”, featuring a guest appearance by Zoltán Farkas, lead singer of the Hungarian metal band EKTOMORF. For the Brazilian market, the album will come with a bonus track sung in Portuguese, entitled “Hipocrisia”. The music video for “Truth”  will be included on both versions of the CD.

This Or The Apocalypse