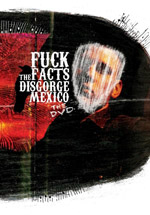 Canadian bastardized grinders FUCK THE FACTS will release their first-ever DVD on May 11. “Disgorge Mexico: The DVD” features the entire set from the “Disgorge Mexico” CD-release show where the band played the album from start to finish for the first and only time. The whole show was filmed with multiple cameras and then edited by Phil Pattison of Nictophobia Films. The DVD also includes “Disgorge, Mexico: The Movie”, a film by David Hall of Handshake Inc. (TODAY IS THE DAY, JUCIFER, SIGH, HAIL OF BULLETS).

“Disgorge Mexico: The DVD” is limited to 500 copies (first 100 copies come with a bonus disc) and like the band’s recently released “Unnamed”  seven-inch EP, is an exclusively independent release only available through the FUCK THE FACTS webstore.