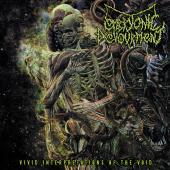 Northern California’s Embryonic Devourment have just revealed their new album ‘Vivid Interpretations Of The Void’s cover art by Remy Cuveillier. The album that coming from Deepsend Records, will be in our hands within the next comİng months. Austin Spence (Bassist/vocalist) says that he loves Remy’s abstract style which is also how they like to think of their music.

WAN ''Wolves of the North''