German death metallers DISBELIEF will release a 20th-anniversary album, “Heal”, on May 21 via Massacre Records.The CD will contain eight songs, including three cover versions and a remake of the classic track “Shine”. 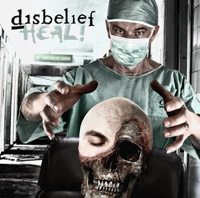 “Heal” will be released with a bonus DVD containing footage of a complete DISBELIEF show from the Walpurgis Metal Days in 2009.