RETALIATION/FINAL BREATH guitarist Dennis Schneider is one of three musicians who have recorded special guest appearances on “Icarus”, the new album from German thrashers DEW-SCENTED. Schneider can be heard on the songs “The Fall Of Man” and “Perpetuated”. 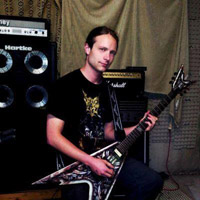 Commented Schneider: “I’ve been hooked on DEW-SCENTED ever since the release of ‘Impact’ back in 2003. When they asked me to do a few guest leads on the new album, I didn’t hesitate one second. I’m really happy with the way it turned out — ‘Icarus’ will rip your head off!”
Added DEW-SCENTED: “Dennis Schneider is an incredibly talented guitarist that has jammed with DEW-SCENTED in the rehearsal room before. In the production period for ‘Icarus’, the idea came up to have him be part of the actual album as well by adding some skillful lead guitar parts. Dennis appears with some furious shred on the songs ‘The Fall Of Man’ and ‘Perpetuated’.”
“Icarus” will be released on July 31 in North America via Prosthetic Records (one day earlier internationally through Metal Blade Records).