Commented DEW-SCENTED vocalist Leif Jensen: “I’m more than proud to be able to present you a new chapter in the history of DEW-SCENTED!

“By early 2011, after four weeks of European touring with NILE, it showed clearly that our previous ‘Invocation’ lineup was collapsing and one member after another left the fold for different reasons. We decided to play some final festival shows together in the summer and then after Party.San Open Air and Brutal Assault festival, DEW-SCENTED went away from the spotlight in order to re-group and regain new focus. And here we finally are again, back with an improved line-up and a really strong new album coming up in July: ‘Icarus’!”
The new lineup re-introduces Marvin Vriesde (SEVERE TORTURE, BLO.TORCH) as main guitarist and songwriter. Not a stranger to DEW-SCENTED’s path of life, Vriesde’s ties with the band go as far as back as 1996, when he played lead guitars for DEW-SCENTED on the band’s first-ever proper tour (with EDGE OF SANITY, LAKE OF TEARS and SADIST), as well as for some additional shows supporting MORBID ANGEL. He later returned as the session guitarist for a European tour with CANNIBAL CORPSE in 2002 or also for various other dates in Europe, Japan and North America all throughout 2005, as well as to appear as a guest guitarist on the “Issue VI” album and in the “Turn To Ash” video.
Added Jensen: “I’m truly happy to have finally managed to team up with my buddy Marvin in DEW-SCENTED. Being one of my closest friends in music and the band’s ‘longest-running companion,’ it’s amazing to be able to finally put the band’s musical present and future in his hands, giving our music a new safe home with his talent and dedication. I can’t wait for you all to hear the great start-up results we achieved with ‘Icarus’!”
Commented Vriesde: “Me and DEW-SCENTED have a long history together. I helped the band out on several occasions in the past, studio as well as live situations. So when Leif suggested joining forces for real on the new record, I was thrilled! This allowed me to write DEW-SCENTED songs that I would really want to hear from the band, from a fan’s point of view.”
Drummer Koen Herfst (I CHAOS, EPICA) and bassist Joost van der Graaf (I CHAOS, CREEPMIME) rounded off the “Icarus” lineup organically, as Vriesde explains in regards to the pre-production process for the new album: “The writing process went really smooth and focused. Me and Leif were bouncing all these awesome ideas around. We realized that these songs deserved to be recorded in the best form possible. That’s why I asked a good local friend of mine, Koen Herfst, to handle the drums. On his turn he brought in Joost van der Graaf to handle the bass duties for the album. Both are amazing musicians… and that’s what sets ‘Icarus’ apart for me. I think everyone brought something extra to the table, which really took the album to a higher level. ‘Icarus’ is a really heavy album, but it somehow has a darker feel to it in comparison to the previous DEW-SCENTED albums.”
Last but not least, guitarist Rory Hansen (I CHAOS, BLO.TORCH) was added to the band’s ranks as second guitarist shortly after the album recordings. On recommendation of all the other three new members, his presence paves the way for a really skilled and menacing dual-guitar-team.
The new DEW-SCENTED lineup will make their debut shows on July 20 at Metalsplash festival and July 21st at Queens Of Metal festival. 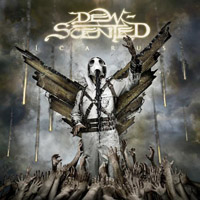 Jensen previously described the “Icarus” main theme as “a modern-times, very apocalyptic adaption of elements of the Icarus myth, using a lot of its symbolism while interlinking with several other personal or observant subjects in true DEW-SCENTED fashion.” While the album — recorded at Soundlodge Studio and produced by Jörg Uken (NIGHTFALL, SUICIDAL ANGELS, GOD DETHRONED) — is not quite a concept album per se, Jensen says “Icarus” “has a pretty coherent lyrical flow, and that helps to enhance and also to intentionally enlarge the atmosphere and vibe created by the music.” The “Icarus” cover artwork was once created by Björn Goosses of Killustrations.
“Icarus” will be released on July 31 in North America via Prosthetic Records (one day earlier internationally through Metal Blade Records).
Source: Blabbermouth.net