Selfmadegod Records announced the re-issue of the debut Surgical Disembowelment LP by the cult goregrind band DEAD INFECTION from Poland.

Selfmadegod, also based out of Poland, will release the vinyl version of this album consisting of 10 classic songs recorded back in 1993 at PR Studio, Olsztyn, Poland. The line-up for the session was: Cyjan – drums, Tocha – guitar, Maly – guitar, Kelner – bass, vocals.

Surgical Disembowelment was originally released as a CD/LP in 1993 by the now-defunct Morbid Records from Germany. The re-issue is strictly limited to 500 gatefold copies, with 100 on red vinyl and 100 on green.

The release date will be set for early July 2010. You can pre-order the LP now at www.selfmadegod.com. 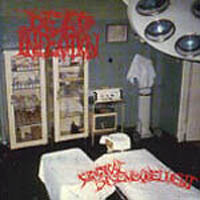 A special combo package, including the record and a shirt, are available exclusively at selfmadegod.com.