Polish technical death metallers from Catharsis have finally completed their work on ‘Rhyming Life And Death’. The band was active in the 90’s, often compared to bands like Death, Atheist and Cynic. After a quite succesful release of ‘Bitter Distain’ and some life performances, Catharsis decided to take a break. Back in 2010, reactivated by the bassist/singer Adam Mamok and guitarist Tomasz Świerz, the band started to work on the new material. Joined by a young female guitarist Katarzyna ‘Kate’ Bujas, Catharsis decided to finally hit the studio. The album was recorded in Invent Sound Studio (Bydgoszcz, Poland) during a few sessions from October 2012 to March 2013, with a session drummer Łukasz ‘Lucass’ Krzesiewicz (Sammath Naur, Gida) – produced, mixed and mastered by Szymon ‘Sigmar’ Grodzki (Sammath Naur, ex – Mala Herba). The cover artwork of ‘Rhyming Life And Death’ was made by Michał ‘Xaay’ Loranc, the artist known from cooperation with bands like Behemoth, Vader and Nile. 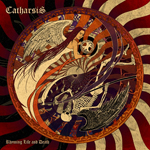 Catharsis is currently looking for a label.

Tracklist:
01. Creeping Sadness And Everlasting Hope (intro)
02. Without Vocation
03. Those Who Have Never Risen (you can listen this song below)
04. The Art Of Life
05. Norwegian Impressions – Burning Churches (instrumental)
06. Breath Of Death
07. Ecological Violence