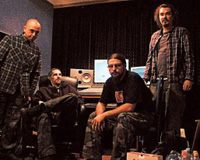 Warsaw, Poland’s cutting-edge grindcore squad ANTIGAMA this week entered the studio to record their sixth full-length album, the follow-up to 2009’s “Warning” as well as last year’s “Stop The Chaos” EP. According to founding ANTIGAMA guitarist Sebastian Rokicki: “This is going to be the most mature, and at the same time most diverse album in the band’s whole career.”
The recording sessions are taking place for the third time at Progresja Sound Studio with producer Pawel “Janos” Grabowski and will last through the end of January. The current band lineup enlists guitarist Sebastian Rokicki, vocalist Lukasz Myszkowski, bassist Michal Zawadzki, and drummer Pawel Jaroszewicz. This is the first studio session in ANTIGAMA’s history to without Szymon Czech, who passed away in November 2012 due to illness.
ANTIGAMA has completed an arsenal of new tracks for the album, now with the confirmed title, “Meteor”. A release date late in the Spring via Selfmadegod Records will be made available soon, along with an avalanche of updates as the details on this anticipated, sure to be explosive and devastating release become apparent.