American blackened metal warriors WINDFAERER will unleash their new EP entitled Solar within the coming weeks. The self-released follow-up to the band’s critically-acclaimed Tribus debut, was recorded with Bobby Torres at Frightbox Recording in Clifton, New Jersey and will include seven tracks of violent beauty laden with elements of black and melodic death metal while exuding a folkloric edge.
Comments guitarist/bassist/vocalist Michael Gonçalves of the record: “Solar is a tribute to the intangible and to those things that make life seem so hopeless, yet beautiful. The title represents a unity of the celestial and infernal forces that govern mankind. Compared to Tribus, the lyrics have become more personal and abstract. Solar is WINDFAERER being a more confident entity.” 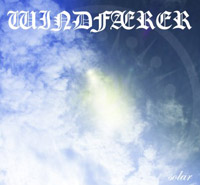