Knoxville, Tennessee death metallers WHITECHAPEL have set “A New Era Of Corruption” as the title of their third album, due on June 8 via Metal Blade Records. A song from the CD will make its online debut on April 12.

“A New Era Of Corruption” was recorded at Audiohammer studios in Sanford, Florida with acclaimed producer Jason Suecof (TRIVIUM, ALL THAT REMAINS, THE BLACK DAHLIA MURDER, CHIMAIRA, DEVILDRIVER). 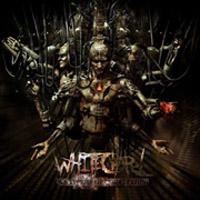 Handling artwork for “A New Era Of Corruption” was Brent Elliot White, who previously worked with JOB FOR A COWBOY and CARNIFEX. “Brent absolutely nailed it,” states Alex. “The dark and ominous vibe he portrayed with his art fits the mood of the CD perfectly.