Swedish black metal heathens WATAIN are set to unleash a new DVD upon the masses. Titled Opus Diaboli, the production commemorates the band’s 13 years of chaos by providing a visual and audio documentation of their ceremonial anniversary concert performance in Stockholm and the long years of physical, intellectual and spiritual work leading up to it. Opus Diaboli is an epic 90-minute journey into the forbidden realms of wild-hearted Satanic metal and the manifestation of a unique band that has truly chosen a path few have ever dared to tread upon. 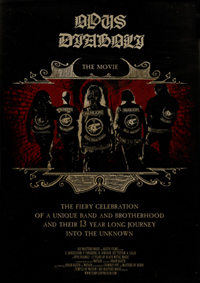 Comments the band in a collective statement: “This movie was first meant to be the recording of our 13-year anniversary concert, but as everything with WATAIN, it took on a life of its own and become one of our most ambitious projects to date. It is a very personal and emotional piece of work and is certainly not for the faint of heart. But for those who wish to explore the glimmering abyss of WATAIN further, this will be a rewarding release for sure. The box version of Opus Diaboli [available exclusively through the band’s own WOLFWEAR.NET] contains an exclusive photobook. It was an overwhelming experience going through the massive archives in search of photos that best sum up the storm of passionate turmoil that has marked the WATAIN journey, especially since we wanted to stay away from live photos and focus more on moments off stage. The results were however very satisfying and offer a rare and spicy mixture of photos of which most have never been published previously. We are also proud to announce that this will be the first release on our own label ‘His Master’s Noise,’ a name originating from Bathory who had it in mind for their own label back in the early 1980s. Just like with our merch store WOLFWEAR.NET from which the limited box set will be available, this time we have chosen to stand by our own and do things our way.”
Opus Diaboli DVD: A four-panel digipack including the DVD, two audio CDs featuring the full concert plus a 16-page booklet with historical photos and flyers.
Opus Diaboli Box: Limited 12” box including the DVD, two audio CDs and two LPs featuring the full concert plus an exclusive 64-page booklet with historical photos and flyers.
Opus Diaboli will be unleashed in North America on June 5, 2012.

VORTEX OF CLUTTER ''The Ghosts of a New Generation''