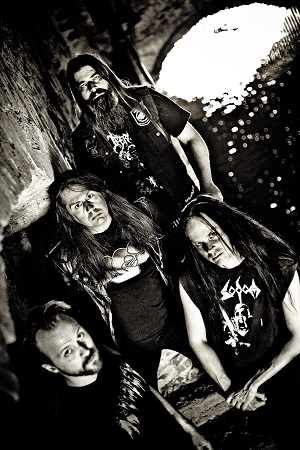 Doom/crust/prog-infused death metallers USURPRESS have signed a deal with Agonia Records. The quartet from Uppsala, Sweden recorded their 3rd album, entitled “The Regal Tribe”, during the fall of 2015 under supervision of rising star producer Lawrence Mackrory (FKÜ, Darkane). Its release date has been slated for 2016.
“The name Agonia is synonymous with integrity, originality and quality”, says USURPRESS frontman, Stefan Pettersson. “We felt that to be able to compete with the bands already signed to the label we had to challenge ourselves and really step up our game. We decided early on to discard the traditional way of songwriting/arranging and compose The Regal Tribe one piece at the time, starting with the first riff in the first song and ending with the last riff in the last song. That way we hoped to avoid the album becoming repetitive and stale and instead more fluent and powerful. Listening back to the finished album, I’m convinced we did the right thing. This is the album we have always sought to do”.
Cover artwork, tracklisting and other details of the band’s 3rd album “The Regal Tribe” will be revealed shortly.
Line-up:
Stefan Pettersson – vocals
Påhl Sundström – guitar
Daniel Ekeroth – bass
Calle Lönnberg – drums