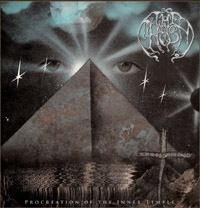 VIC RECORDS has signed a license deal with (the longest running and most respected Death Metal Act from Mexico) THE CHASM and LUXINFRAMUNDIS PRODUCTIONS for the European releases of the reissue of their legendary “Procreation of the Inner Temple” debut album from 1994 on CD, wich will also include their complete 1993 demo, rare pics and extensive liner notes from Olivier ‘Zoltar’ Badin, also a new exclusive repressing on digipak of their very well received and most recent album “Farseeing the Paranormal Abysm”, which was originally released on a limited edition by Luxinframundis in 2009 and mainly available in North America and sold out for close to 2 years.