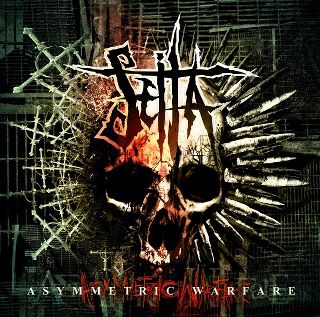 From band members of SEITA : 23 March our new CD will be released! The mixing/mastering of the new album ‘Asymmetric Warfare’ -10 tracks- was in the hands of Daniel Bergstrand/Rickard Sporrong, known from their work for Meshuggah, Behemoth, Decapitated, In Flames etc. and will be distributed/promoted by SAOL/CMM from Hannover
SEITA is based in Amsterdam, but the bandmembers are originally from Brazil, Sao Paulo. With their Southamerican thrash-death metal they are able to warm up your audience instantly; coming from far with a clear goal in mind they give it ALL on stage! The band played many festivals and shows in the Netherlands, Germany, Belgium, France, Spain and even made it to the main stage of one of South-Korean biggest festivals (Dongducheon Rock Festival) and shared the stage with bands like Soulfly, Sinister, Pestilence, Enemy Reign, Skarhead, The Accüsed, etc.