Mysterious death metal band Reptilian Death, side project of Demonstealer (Demonic Resurrection) have revealed the artwork and tracklist of their new album, titled ‘The Dawn Of Consummation And Emergence’. The artwork has been done by Michal ‘Xaay’ Loranc who has previously worked with bands like Behemoth, Demonic Resurrection, Nile, Vader etc.  The album features 12 tracks of pure old-school death metal.  The band is also now fronted by Vinay Venkatesh who also fronts one of India’s most popular metal band, Bhayanak Maut. 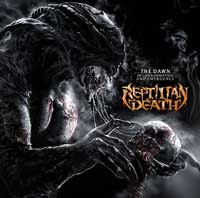 Tracklist:
01. PrimEvil
02. Inchoate
03. Stimulate. Hike. Impel. Tear
04. Soaked With The Imperfections Of Puerile Blood
05. Emerge, Hatred, Emerge
06. Distorted By Bondage, Blood & Bestiality
07. Unnervingly Perverted At The Altar
08. Patchwork And The Art Of Skinning
09. O
10. Now You Graze Upon Me
11. Marvelous Gods – The Apple Of My Eye
12. Emergence – The World, Your Playground
The album is releasing in India on 25th May 2013 via Universal Music India. Dates for the worldwide release are yet to be announced.
Said Devraj Sanyal, MD Universal Music group, South Asia “Metal is a burgeoning scene in South Asia & often ignored. At UMG we believe that this scene must be supported fully and Reptilian Death’s new album “The Dawn of Consummation & Emergence” is a fierce statement to every metal fan. Brilliantly produced & madly brutal Reptilian Death is UMG’s foray into the Metal publishing domain & this will lead the path for many indie bands to follow.”