Hails from the hordes of the eastern Europe and the small himalayan Nation of Nepal! How are things at Nader Sadek camp?
Better than ever, thanks for the interview!

Its been a while since 'In the Flesh' has been released. Many fans are now really looking forward to the new full-length. Are there any instant plans for that? (If yes then everyone would like to know the collaborations)
I released Malefic Chapter 3 the fall of 2014, it went well althought i had some serious reservations about it. So i released it for free with 3 major magazines , Terrorizer ( uk) Legacy ( germany) and Decibel ( USA).Im getting ready to release Malefic chapter 2, which features some amazing musicians like Glen Benton of Deicide, Derek Roddy of Hate Eternal/nile, Dominic from Augury, ex beyond creation
Novy from Vader/Behemoth, plus Attila from Mayhem and a few surprises, nobody is going to expect at all! 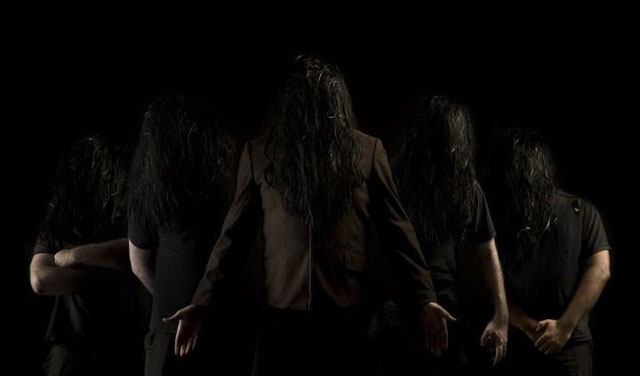 We know Nader Sadek is mostly or solely your concept and there are many potent musicians that join you in this. How is it working with all of them as they bring different influences and view frame. Aren't there any chances for clash of egos? How do you handle?
Yeah , I  was very infleunced by Chuck Schuldiners curation of his own band. Im not a guitarist and im not iunfleunced by his playing, as much as  i am of his thinking. But i wanted to take a step further, and really just make "dream team" as an ongoing project, for the most part he chose local musicians, or at least they were all american, for me to create the cultured hybrid of death black is very important, and this can only be achieved by havnig people of actual different culture, different influence.
Yes, there are clashes, thankfully i discontinued working with Flo and Rune, as they were constantly fighting over  the loudness of their instruments, each one of them wants to be louder than the other among many other ego issues. It used to make me go crazy, but now that i got rid of them, i really dont have that problem , everyone i work with is a team player, and understands the project. At the end of the day im the master of this project and things happen the way i want them, I try to let each person have their say  in the Sound of their instrument however the mix  is ultimatley in the mixers hands, as that is an art as well. But i do respect everyones opinion regarding how they want to sound, and that is communicated to the engineer mixing the album. 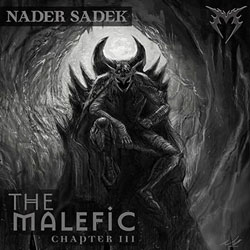 The whole Nader Sadek has been created with a very unique concept and the delivery is always untypical. Its  very interesting to delve into the nader realm and submit to the dark aura of art and vision that you deliver. What made you think that you should start a project like this?
Thanks for your kind words! Well, ive never been one to confrom to  a single concept, ppl categorize and compatarmentalize everything so much, and i always try to be free of narrowing things down, ofcourse categorzing things is neccessary, however, for me as an artist, i felt that i cant express myself through one type of art , i need more, some things just cant be expressed with a drawing, something s cant be expressed throuh music. I was especially motivated when i was talking about it and people would say , you cant do that, and of course that was the thing that pushed me  to pursue it, i love a good challenge. And i think succeeded to a certain degree, still there so much more to conquer and explore, it will simply never end…

Nader, you recently organized Inquisition show in Egypt. There were many backlashes from various communities, but we saw it happened. Tell us about it. The whole event seems so intriguing for fans of the extreme music and all who cares about the freedom of expressions.
Yeah,no only did the show happen, it was one of the most amazing shows ive ever experienced. there was magic in the air, and pure evil oozed like slime from the speakers. but unfortunatley the story is quite embarrasing. Basically after i started bringing real international Death Metal bands like Aborted, the local bands but especially had low attendance at their shows, also an event organizer who was intimidated that i would steal his thunder. They started to get jealous, and tried to find ways to screw up my show. Most shows are held at a venue of a  Muslim Brotherhood supporter, which  is a Terrorist organziation,hiding under the veil ofreligious  piousness. I felt horribe that i would make art in a place like that,  They also took 75% of the income and wouldnt let me count the ticket salesfrom my two shows i organized there, i counted over 700, they said 400. So it was very frustrating. so i decided to do it at  a bar where i wouldnt have to be asosicated with backward thinking like that of those ppl, just like any country, to me it was rediculous  that one venue in the entire country is allowed to play metal. I mean it simply made no sense. Unfortuatley that was exacty what this oppositioin needed to ruin my show. you  see they couldnt do that at myother shows because it was in the same venue that they play in, they attack that place, and they never get to play there again, so they couldnt, so me playing ina bar where alcohol and smoking is allowed, makes it look worse, and they get to say to the authority, " Look thats the devil worshipper right there " pointing at me, " but we, we do it in a Halal place, see its so safe, it supports theMuslim brotherhood"  and many of them should be educated enough to know inquisition do not worship devils. But thats a rediculous thing, because it really has nothign to do with that at all. All it takes is one asshole  to make a problem and the whole thing comes down. Unfortunatley itr was Dark Fortress' bad luck that they came in a time where the musicians syndicate, which is basically a money laundering mafia , with their leader who is basically a pimp to say the least.

Can we see more such shows in the future there? What changes do you think it will bring?
Yeah, i feel its time that ppl accept metal, as a form of music and art, wheather they like it or not, thats up to them but they cant make us stop. I'm also deifnitly not making those shows or my art "safe" it will always be controversial, and the ppl who support that those are the real metal heads, not cowards.

What would have been the consequences had the plan (Inquisition show) went wrong? Superficially the world belives that the extreme metal conditions at that part of the world is very vunerable and the consequences could be dire. The world was recently knocked off by the news of the Iranian band Confess being jailed and facing some serious trials in their homeland.
Egypt is nowhere near as severe as iran, i do understand the concern, but i had all the permissions from the goverment to do this show, so it had nothign to do  with the goverment, this is allthe work of three losers, doing what they do best, which is be losers. They reead every interview i do and then contact the ppl who interviewed me and complain and whine and cry like little babies, i can guarentee that ocne they see this interview, they will try to contact you, or the webmaster, itrs just really sad and embarrassing, but they  will be tamed, and they will be quiet one day i hope. But speaking about  the iranian band,  iran is extremely strict, not a place i would ever want to visit,  or play under its current leadership, i pity the ppl that live there. They have some of the weirdest laws. And its really hard to compare the two situations. In egypt its more of ignorance of the society, where as in iran its more the severity of the relgious goverment. I made an experiment to prove my point, I took inquisition out to a neighborhood near the pyramids, just to see their reaction. what happned was exactly what i expected. People came from all directions, to greet them, now keep in mind they had their cropse paint and full  stage attire on as they walked in the streets of cairo, that was simply amazing, but it wasnt a miracle that they werent attacked, the ppl of egypt- in their hearts and minds are generous, warm and welcoming, ppl came and shook their hands and wanted to take pictures WITH them, one guy begged me to let his 7 year old daughter take apicture with them. They askled me what  are they?? and i said their musicians, and they inquired further, So i said remember  back in 97 when metalheads were arrest for devil woirship and they said yes we rememebr the devil worshipping  period, and i said well, do these guy look like they worship the devil? and they all said NO, meaning  they understood that its Art, which is quite surprising actually because this neighborhood is very low income and poor, so they donthave the culture to really quite understand " what is black metal, or what is a metaphor"  these things cant be explained to them, So the real problem is when you have someone who is popular figure like the head of the syndicate of musicians, go and post that he was in charge of the cancellation of a devil worshipping mass, ( which neither was the concert a satanic mass nor did he cancel anything) I honestly think he was on drugs or was drunk when he wrote, total loser who needs to make himself feel important by stating. he saved the egyptian youths from the devil. what an idiot… One thing for sure, there are alotof losers here in egypt, ppl who simply dont know what to do with their life and they are the products of failed  authority, which was supposed to be outsted but seems tohave remained. I refuse to give up though, and i will do whatever i have to keep going.

Thank you Nader for you precious time. We really hope that you travel to Eastern Europe and probably to Nepal someday. It would be an absolute pleasure for everyone to witness Nader Sadek as a band. Any last word before we wrap up this short interview?
Hey, thank you, Yes, im working on bringing Sepultura,  this summer, im very excited about that. I also want to tellthe readers to follow your dreams and never give up,  do everything you can but without hurting others, or trying to ruin other ppls work, thats not gonna get you anywhere in the long run. Know that you are in control, and that no one controls you, and you will see in time, how the world will work with you. Think positively about the future, dont dwell on the dark past, release yourself from the shackles of limitations. You  are and can be great, just beleive in yourself.