Greetings Nick, could you introduce Mortuus Sum to the readers?
Mortuus Sum were created in 2002 by Yngve (me) and Auren, under the name Panzerfaust. We composed a couple of songs, but never recorded anything, so we split up. Auren left for Sweden, so in 2007 I reformed the band under the name Mortuus Sum. After a LOT of lineup changes and hard situations, we are still standing strong against all odds. The current lineup is:
Yngve – Guitars, Drums
Jim Havok – Bass (Chained and Desperate)
Ikteros – Session Vocals (Funeral Storm, Nano Infect, Aphorism, Mors In Tabula)
Banshee – Lyrics 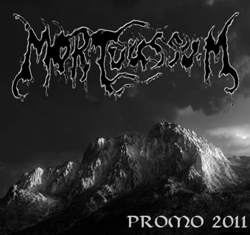 What does Mortuus Sum means and why did you decide to call your band like this?
Mortuus Sum means "I’m Dead" in Latin. When I reformed the band, this name fitted pretty much, because I wanted the band to be around death and darkness lyric wise back in 2007. Right now of course we have lyrics about other subjects too, but the name remained either way.

How many releases do you have so far with Mortuus Sum?
So far we have released "Promo 2011" containing one song called Mortuus Sum. This was a digital release, but 10 CD-r copies were made as well. Our second release is a digital split EP entitled "Inverted God", along with Funeral Storm. This release contains the same song as "Promo 2011" and a Funeral Storm song, recorded 11 years ago!!!! Both releases are available for free downloading.

Do you play live, or is it just a "record" band (I mean, a band that only records)?
No we don’t play live. We are a studio band, unless something REALLY good comes up. Still it’s difficult to rehearse, as we all live in different cities. 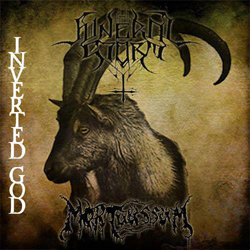 Beside in Mortuus Sum you play also in some other bands as well. Could you introduce them to us?
Indeed I play in several bands, but we will need a lot of pages to intoduce them all. So here are the most active ones:
W.E.B. (Dark Metal)
Mors In Tabula (Industrial Death Metal)
Dizziness (Black Metal)
I am also a recording member of Funeral Storm, Aphorism, Archegonos, Blood Feud and Vetusmora and a live member for Nano Infect.

With what band will the fans be able to see you live somewhere?
Right now the only band that’s active in all ways (recording and performing live), is W.E.B., so it’s most likely to play live with them.

Is any of this band recording something soon?
With almost all the bands, we are in the process of composing and/or recording, so in a few months time, there will be a lot of material to be released!

Any last words?
First of all, I want to thank you and my good friend cenknsen, for supporting me and Mortuus Sum. It’s great that there are zines (web or physical) supporting the underground metal scene.
For info and updates about me and my bands, you can check www.facebook.com/nicksamiosdrummer.
Support the underground and never compromise your music!