Recently I had the possibility to talk with Charon, vocalist of IMPERIUM INFERNALIS. Here you can read the results:

Before we come to the music, please introduce at first the band to us. When and where did you found IMPERIUM INFERNALIS?
Greetings Claudia and thanks for your interest. Imperium Infernalis formed in late 2003 in Heraklion (Greece) by me(Charon) and Ravenous. After several line-up changes we came to our today’s setup with me on vocals, T.N on guitar, Goatlord on bass and Savage on drums.

Why did you chose even this band’s name?
The first band name was "Satan’s Dawn" which lasted for about 6 months, then we changed it to
"Satanic Obscurity". I came up with "Imperium Infernalis" because it has more metaphorical meaning. It actually means "Infernal Empire" in Latin but we didn’t want to represent something satanic so the "Infernal" part could be translated as our inner war and the hell that lives in us all.

What prevailed you on starting a Black Metal band anyway? What was your inspiration?
Well, I started listen to metal since I was 12… at the age of 15 the "Teach children to worship Satan" album fell in my hands. That was it. I have never felt this way with music before. So I started to buy Black Metal albums and scratch my guitar and try to play something like it. 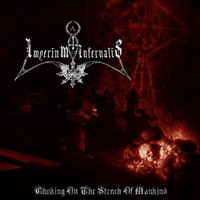 You are busy pottering around on a new cd. It is said to be called "Choking On The Stench Of Mankind". Can you already tell us something about the particular songs of the cd? Will there be any changes musically and lyrically in comparison to your prvious productions?
Yes, the album will be called "Choking On The Stench Of Mankind" and it’s our first full release. It will be released from "Le Crepuscule du Soir" production around January 2013. It will contain 6 songs including the song "Subhuman Extinguish" which is also included in our past two releases. I am referring to that specific, because the band changed musically with the composition of that song. Lyrically we are still on the same pattern, but more meaningful. The production of the CD is really good, I am glad we had excellent people to work with and we all gave everything for this outcome. I could actually say that the sound is quite unique for the standards of Greek
Underground Black Metal Scene.

There is a pretty lively Black Metal underground in Greece Are you in contact with each other or does every band goes their own way?
Greek U.B.M scene is quite big and has tremendous bands in it…The sad thing is that most of them are trying to "show" better by criticizing others. Everyone should try to be better with his own skills instead of criticizing they can afford to pay them. Of course we are in contact with other bands and I can say that most of the guys I’ve met, played and I’m in contact with, have the same level of understanding, respect and ideals about our music

The band IMPERIUM INFERNALIS already exists since 2003. Did the scene changed meanwhile?
Yes, the scene has changed a lot since then. You know, there are always fashion music types that sell the most and many bands pop up, playing this just because it’s the "in" music of the year. The only bands that stay alive and keep growing are the bands that have strong believes to their music and genre.

Are there many possibilities for a gig in Greece?
There are no possibilities and shit. If you have the money then you are playing. That simple. Most of the production companies don’t give a shit about the music. They only care about your money or the people you are going to bring. I won’t forget how close we were to play with Gorgoroth until "someone" told us to pay 250 euros for each gig. Of course there is and the opposite side, with people that really care about the scene and doing their best for it, but
they are 5 out of a 100.

How important are your fans to you?
Well fans is a big part of music. But still I prefer 100 guys who understand what we are doing on stage, than 300 drinking their beer, making out with their hot metalchick, commentary our outfit etc…

Where do you see the band in 5 years?
I want to believe that the album will go well and by the end of 2013 the album will be released in it’s LP form. We are already composing new songs and we are looking for a split release. I am not sure where exactly we are going to be, but for sure Imperium Infernalis will stay alive!

Are any gigs or even Festivals planned? When will we see you also in Germany?
After the official release date we are planning some gigs around Greece to promote the album. We really want to visit a few cities in Greece and I am also waiting for a response from France. We got a few connections in Belgium as well but everything really depends on our trip budget…About Germany I don’t know yet but we are fully opened for invitations!

Some last words to the fans:
We want to thank everyone who stood by us and believe in our work.

Many thanks for the interview and all the best for you and IMPERIUM INFERNALIS in the future!!!