Brazilian symphonic black metallers FROST DESPAIR is finishing the recordings of its debut album, “Surreal”, the follow up to 2011’s “The God Delusion” EP. The debut was recorded in Hurricane Studios, and produced by Sebastian Carsin (Enthroned, Bestial).
The artwork was created by Marcelo Vasco (Dark Funeral, Dimmu Borgir, Borknagar), who stated: “This illustration for ‘Surreal’ was forged through the general concept of his title and acclimated in the most dirty and chaotic way, mixing elements biomechanics with nature and science where everything becomes a kind of bestial and psychological heart.” 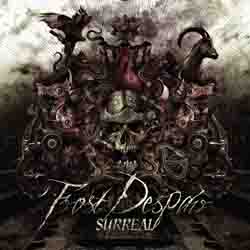 Murder Made God - Throne of Derision