Today California progressive grind conquerors CATTLE DECAPITATION release “Lifestalker,” the second single off their new album, Monolith Of Inhumanity!
Set for North American release on May 8, 2012, the record was produced by Dave Otero of Denver’s Flatline Audio and sees the band exploring innovative new techniques in song writing without abandoning their signature formula of confrontational audio wreckage and self-loathing lyrical content.
Comments singer Travis Ryan: “We just returned from a great European tour where we played a ton of new songs which were received extremely well by everyone over there! So much so that we decided to premiere the second sample track of our new album Monolith Of Inhumanity on a European website for all our fans and the new fans we just made during this last tour! We had a blast and we hope you all get a kick out of the new track ‘Lifestalker.’ This new album is light years ahead of the rest of our albums and we look forward to coming back to Europe to decapitate you all with it!”

Monolith Of Inhumanity is an achievement that stands out as one of the most volatile, ambitious, and impossible to aptly categorize records you will hear in 2012. Dragging their ever-evolving deathgrind sound kicking and screaming into the epic territory inhabited by the likes of Dimmu Borgir and Anaal Nathrakh, the quartet redefine all perceptions of what CATTLE DECAPITATION is. With their seventh full-length, the band have never sounded more focused, aggressive, or maniacally determined to get in the faces of those who erroneously believe they’ve already experienced the band at their extreme best.

The 11-track Monolith Of Inhumanity features a host of guests including Mike Majewski of Devourment (guest vocals on “Projectile Ovulation”), Lenard Leal of Cephalic Carnage (backing vocals by on “A Living, Breathing Piece of Defecating Meat”), The Cephalic Carnage Community Men’s Choir, consisting of all current Cephalic members and alumni Jawsh Mullen and Zac Joe (gang choir vocals on “The Carbon Stampede”), and ambient and noise interludes by Los Angeles’ most extreme decimator of sound, John Wiese, as well as another strikingly brutal cover by Wes Benscoter. 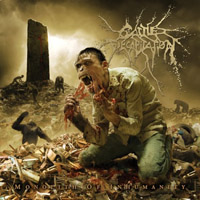