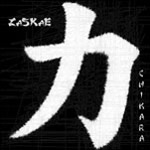 What could you tell me about your first release? Are you satisfied from the answers of worldwide grind maniacs?
The "Chikara" E.P. was just our personal Tribute to Hellnation. Nothing more, nothing less. The genesis of the Record was not to release it. We made it just for us. But our friends told us to release it, because they really like it. Thats why "Chikara" became a Free-Download E.P.

Can you briefly explain the songwriting process of this songs? Is this a homemade production? What was the hardest part of recording for you?
Just jamming around and connecting the stuff that fits. The whole Recording was just a Jam-Session. The hardest part was, that we don’t play any riffs we’d used already. We recorded the E.P. in our Practiceroom.

How did you end up with To Live A Lie Records? Are they your friends or is this your label?
We just asked them to release it on their Netlabel. Thats all 😉

Could you tell me about genesis of the name of band? Are you a fans of manga? Is this any connection with a feature of Sasuke Uchiha? Why did you name your band this way?
The genesis of the Bandname will be answerd in the next question. No, I don’t like to read Comics and I think the others don’t like it too. A Connection to Sasuke Uchiha? Is that the missing Link? Let’s say it this way: maybe… It is really interesting how many and varied association the people have with this name.

Let’s talk about the lyrics. What’s it about? What the inspiration to write your songs?
The whole Record don’t have any Lyrics! I was just screaming some shit, it’s a "fantasy language". Please remember: Chikara was not planned to be released! A friend of mine was asking me: "What language is this? Japanes?" and because of this funny question, all songs getting japanes names. After that, we needed a Japanese Bandname. We started to fooling around and ended up with ZaSKaE.

Could you tell me why the band members wants to stay anonym?
Because we play in this Lineup in another Band and we don’t want a connection to the other one. Besides… it makes it more interesting 😉 Probably we will change it one day. Who knows.

According to previous questions – is this impossible to see you on gig?
I really don’t know. Time will see.

In your opinion, what’s the meaning of Grindcore? Why did you interest this music and which parts of them are the most exciting for you?
I’m not into this whole Grindcore stuff, but our Drummer. You are talking to the wrong person in this way. I prefer Punk, Crust, D-Beat and Thrashcore/Powerviolence. The most exciting part is to play fast and end up in a doom part. I love this combination.

Could you tell me something about german grind scene? Which bands do you prefer the most and which new bands are the most devastating? 🙂
I don’t like scenes and I don’t feel like to be a part of one. Thats why I can’t and don’t want to tell you anything about the german Grind-Scene. My fav. Grindcore Band are The Arson Project. They are not from germany but simply the best. Their E.P. "Blood And Locusts" is in my opinion the best Grindcore release of all time!

Do you know about polish scene? Any bands, labels, zines…?
Nope, sorry. I only know some big ones like Vader or Behemoth and that’s more Black/Death Metal 😉

What’s the Zaskae plan to do in the future?
At the moment we’re writing some Stuff that will be not released in our Main-Band. We’re planning to do some Songs in german in the Style of ZaSKaE. But more Punk, less Blast-Beats and I will defuse my Vocalstyle, because my voice fucked up totally after the Recordingsession 😉 But we don’t know if we will release it as ZaSKaE.

Thanx for your time. Any final words for our readers?
Be yourself and don’t be a slave to a scene!