Hello and welcome to Extreminal Webzine, to get things started please introduce yourself and your band "Solar Deity".
I’m Aditya Mehta, the vocalist/guitarist/bassist of Solar Deity. My friend Yash Pathak, who was with me in our brutal death metal band Exhumation, is the drummer for this black metal project. Solar Deity plays Pure Satanic Black Metal. 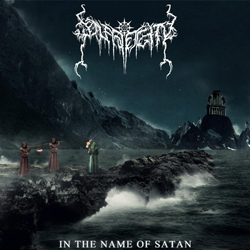 So tell me Aditya, after being with a Death Metal Band (Exhumation) for almost 7 years what made you form a Black Metal Band?
Yash and I wanted to make some truly blasphemous music and it had to be black metal this time around.

The Debut "EP" (In The Name Of Satan) was a success, are you looking out for a Label at this point of time?
No, we’re not looking for a label. We’ll just keep making music and releasing it.

What’s the main inspiration of the band?
The desire to make songs which aren’t already there.

Do you have any other side-projects?
Not yet. I’m going to start a few more bands because I have some other music to make. 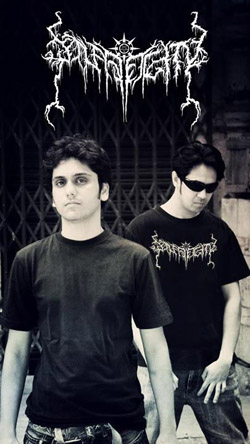 What are your long-term plans as a band? Do you plan a tour?
We haven’t planned anything. I’m not in touch with most people from the scene, and none of my friends are managers or organizers. We’ll just keep making music and take things as they come. We’re not dying to go live or anything.

Some of the Local Indian Black Metal fans had some negative things to say about the EP, in your opinion is there any reasons for that?
Really? I haven’t heard anything. All TheReviews have been positive. I know which Indian bands most people are fans of, so I wouldn’t take them too seriously. In The Name Of Satan has kicked everybody’s ass.

You have been in the Metal industry for over 12 years now starting off with Demonic Resurrection, Exhumation and now Solar Deity. Please share your experience with us.
It has been amazing. I got to learn so much in all these years. Although I don’t see it as an industry.

As I know that you’re a reviewer as well. Can you share with us the best and worst album of this year?
Isn’t it too early to say that? We’re only six months down!

Share something about Yash with us.
Yash and I are old friends. He’s a nice guy who doesn’t hold grudges… he is also great fun to chill with!

Thank you for your time with us at Extreminal.com, anything you’d like to share with our readers?
Always stand up for the right thing!