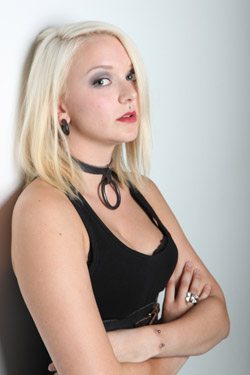 Hi Tiril, first of all congrats that you joined to The Way Of Purity. I read that you have connections with the band before. By which way were you helping to them?
Thank you very much for your support, I am really glad to talk to you. I have been in the project since the beginning, I was not on stage but the band members asked me to cooperate on some ideas due to the lyrics. Everything started because two of the guys from The Way Of Purity (bass player and guitar player) came in Norway to make some investigations on a legend they knew about. Of course I was a fan of the music too, but what really fascinated me was the unusual approach to the "band". Instead of writing lyrics they really wanted me to become part of what they talk about and asked me to perform the cry of Liti Kjerst and film it. I have been long terms friends with the band members since that thing happened, so when the old singer decided to leave, we talked it over and decided that I was to be the new singer.

Why did XBETTYX give up the vocal? What’s the last situation of the staff with you?
Betty was the voice of the band but she was no more part of the project because she had some serious mental problems…I would prefer not to talk about this thing.
The Way Of purity is a complex entity, since we don’t act like a "normal" band and the people involved are not the usual people you find in bands…The team is working really hard to push a message and that’s what we really care about.

The faces of the band members used to be hidden, but we know yourself. Why did the band made such a change of concept?
Some of the people behind the project will be part of our lineup and some will work behind the scenes. There no concept changes, since the concept is about TheRevenge of animals and nature against men and humanity. For example, we have in mind a title for the new EP…It will be called "BITEBACK" since that’s the concept. Animals that will "bite"-back humanity. You will never see the faces of the members of the band, since that’s our way. Anyway you see my face and know my name because I decided this…Not the way of purity. We don’t see our project as a band so we don’t follow any rule but mostly we don’t have to demonstrate anything to people…We only do what we feel. Our concept will change if we will declare that humanity is the main thing on the planet, not if show my face. One day TWOP may become just a militant group, a spoken words show or something else. Music is the form of art we are using now to bring this message out (but we don’t act like a band for that reason) …Also, we break our own rules because we are the fucking contradiction, BY CHOICE. 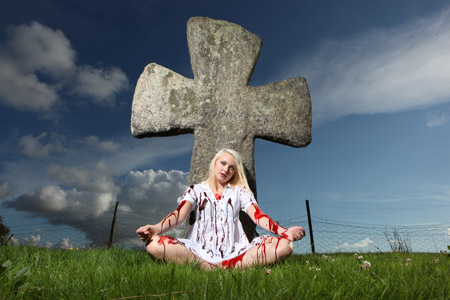 The band used to use aggressive-scream vocals. What kind of vocal are you doing? Will the style of the band have any changes with you?
I really love the vocals that the band used in the past but I will do a different work on the new songs. We are working on more dramatic vocal parts so it will not "flat" like in the past. We will use screams, growl of course but also some crying, spoken parts enhanced by really dramatic lyrics. I mean, what the guys are doing with the new songs is the evolution of the sound so we wouldn’t do another version of "crosscore"…Change or not we don’t care, we just do what we feel. We will be in studio in October to work on the production of the vocal parts, and then 3 new songs will be out in January. 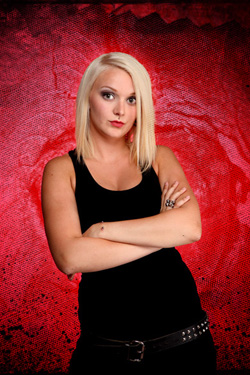 Did you have any experiment of band or stage before joining to The Way Of Purity?
I just finished college, 3 years where my main subject was drama and theatre, I have done things like acting but also foreshows, so being on a stage is something I love.

A film recorded for the band, and broadcasted. Will such different things be made with you again?
Of course, we will do more video documentaries in the future. We really love to express our music with visual ideas…That’s why we really care so much about transmitting something with our photos, artworks ecc…This is part of our project.

What about the preparation for the new album? How are the tunes, lyrics ect. going on?
As I told you before, at the moment we are working on new lyrics and tunes, the EP will be ready around January. Our second full length album will be recorded in August so there’s a lot of work to do on the album. The tunes are a little bit more convulse with a lot of mood changes with more open and emotional parts. We are also cooperating with different people for this new album so it will be more various. Stielas Storhett from Murmansk and Rikk Agnew from USA are cooperating with us at the moment. As you know we don’t like to describe our music with words…

I think the band will keep the same lyric concept. Can you tell about the things that we don’t know about The Way Of Purity lastly?
Well, yes the concept will be the same because this is the reason for the way of purity…The things you don’t know…Now you know everything I guess…there are some things that I cannot say so that’s all at the moment.

Those were all my questions. Is there anything that you want to add?
Thank you very much for supporting our war.
Please visit my page www.myspace.com/tirilskaardal
And thank you for the Extreminal T-shirt!!